This is how I setup my vim to be simpler. And here’s some of the things that I try to simplify, or even get rid of it entirely.

One of the popular vim plugin for statusline is vim-airline. I once like how it display neat info and stuff that I can admire while I’m writing code.

Then I realized that not only I don’t needed most of the information, it also makes my vim slower. I mean, I want to use CLI app to work more efficiently, not slowly.

So I get rid of it. My statusline became simpler, but I still think that it somehow get in my way. I need (want) to focus on the code. So I ended up get rid of the built-in statusline as well.

And from this, I realized that I don’t really need many other UI fancyness when I’m writing code.

Now I know lots of people will think I’m nuts. How can we comfortably write code without looking at the line number?

However, there’s a little issue with this. Basically I need to add a little padding in the left side of the screen so that I can let my eyes breathe. Vim has something called signcolumn, to display little flag in beside line number. So I set it to always be displayed to act as padding.

For me, the way vim display vertical split separator between windowsis just not feels right. Its too bulky. I found a way to make it simple, that is just get rid of it.

This however, make it harder to differentiate content of horizontally split windows. But I mostly only use vertical split, and never really open more than two windows for a long period, so this is not a problem for me.

I always hate how vim display that funny squiggles in the beginning of every empty lines.

I mean, wth is even that? Let’s get rid of it. Well, unfortunately there’s no option to completely remove it, but we can workaround that, we software developer are good in doing it, aren’t we?

Instead of removing it, because of course its not possible, we can change the highlight color for the squiggles ~, by setting the highlight of EndOfBuffer highlight group.

Basically we change the foreground color to 0, this usually matches with the color of the background, so we can somehow make it dissapear.

Vim built-in fold highlight is plain ugly. But we can change it using 'foldtext' option in vim. You can read more about it using :h foldtext.

NOTE: I found the script to modify the foldtext on the internet, but I forget where did I found it. If you feel that you’re the one made it, thank you! And let me know about it, I’ll update this post with proper credit.

No, I’m not saying I’m getting rid of nerdtree. For this, I only get rid of the (▸) symbol for directory prefix. It also has a ‘MinimalUI’ option, so I use that.

By default fzf comes with its own highlight colors, so I need to adjust it to match my setup. 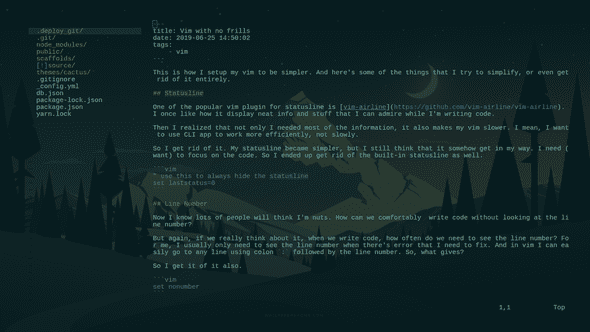 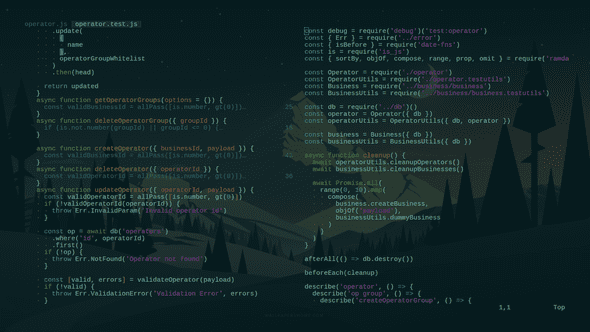 NOTE: We can also use this nice plugin called goyo by junegunn (the same author that writes fzf and some other nice stuff, go check him out) to achieve similar functionality as I mentioned above. It is a plugin that let you go into zen mode in vim, without UI distractions. In fact, I was inspired by it, but unlike that plugin, I want to be in the zen mode all the time.